The  tuff hills  from the  old age  have contributed to the construction of underground tombs.

Christianity spread from the first century, and this development is attested by the  privileges given  by the Emperor Constantine, an example is the construction of the Baptistery of San Giovanni in Fonte.

Named after the bishop of Benevento martyr in Pozzuoli in 305.  The relics were taken to  Naples into the catacombs in the fifth century.

People  have access to the Catacomb  from the church of Good Counsel. The original center was an underground buring place   of a noble  Christian family in  the second century.

There were numerous  expansion works, which were completed in the fourth century, having reached  a second level of galleries.

In the fifth century the faithful people wanted to be buried next to the saint, and it was necessary a further expansion with the opening of new cubicles.

The ancient tomb consists of a trapezoidal room with a central  baptismal source, commissioned by Paul II.  In  776  a  repainting of the room with the fresco of Christ’s baptism took place.

To the south we find the basilica of Agrippino dating from the fifth century, worth considering are paintings depicting the saint who heals the Moro, works dating back to the mid-ninth century.

Behind the vestibule are the tombs.  The upper catacomb dating from the third century, is formed by two almost square rooms communicating with each other by a  staircase.

That the tomb belonged to a Christian community, is demonstrated by a fresco on the ceiling of Adam and Eve. (Dating from the third century)

Poorly preserved is the scene of two women  building  a tower, taken from a Greek work “the pastor of herms”.  In  the catacomb centre there  is the Crypt Of Bishops.

Decorated with mosaics depicting bishops of the fifth century, remarkable is  the one  of  bishop of Carthage, a circular field of golden tiles surrounding the African bishop recognized by different colors of the cards, holding the book of Gospels.

In this same crypt, all the bishops of the fifth century were buried, but the absence of registration does not allow their  identification.

It is located at the Church of St. Mary of Health.  It owes its name to an African bishop who died in exile in Naples in 452.

It can be  reached  through a passage to the catacombs beneath the altar.

It leads to a double row of cubicles,  found again  in 1616, after  the Dominicans had obstructed the passage with twelve altars.

The St.Gaudioso tomb is recognizable by the  mosaic epithaf  in which  the saint is exactly depicted.

They are named after  the eighth bishop of Naples.

The catacombs were digged again  in 1931, of  the two frescoes found,  one is dating back to the fifth century (a prayer  with a red tunic between two saints), the second painting represents a dead woman  between the archangels Michael and Gabriel.

At  the dawn of christianity the  female religiouness plays an important role.

A legend claims Naples to be the first christian town.

Saint Peter would have stopped in Naples during his journey from Antioch to Rome, where he founded  his Church just in the place  remembered  now by the Basilica St. Peter in Aram.

During his stay in Naples he is told to have christianized Candida, who  would have presented him Aspreno, the first town Bishop, after  he was miraculously healed.

The attempt  to give Naples  the christian faith  primogeniture in  west lands is very important.

The Church arising  in Naples  during the first century should be confirmed by the diffusion of the apocalyptic  script “Il pastore di erme”  which was widely  known during the  century of vulgar language spreading.

During the Trajan age this text could have inspired the realization of one of the most ancient  palaeochristian frescos  to be seen in Naples in the San Gennaro Catacombs.

The neighborhood of Pozzuoli having already in 61  a. Ch., when  St. Paul arrived there on his journey to Rome, a flourishing christian community and the position of Naples like a town open to progress, would justify the presence of christians in the early apostolic  age.

In spite of the important origins of the neapolitan christian tradition  directly bound with St. Paul, the Vice-King Naples felt the necessity of a christian  town re-foundation  due to the work  of the virgin St.  Patrizia,  whom we have  a few information about, but her  tradition and devotion are still alive  and her relics are kept  in the Church S. Gregorio Armeno since the XIX century.

St. Patrizia too, like St. Gennaro  regularly  melts her blood,  not because of martyrdom but  due to  an exceeding devotion.  It is asserted the devotion myth about  the Holy Patrizia could have been originated in the protestant  counter-reformation  age  adding more values to devotion and worship.

The myth construction about St. Patrizia makes arise  the thirst for  holiness  pushing Naples  collecting  Holy men not belonging to the town, since the Middle Age. The same St. Gennaro ( a martyr of the IV century) and city patron isn’t just neapolitan, he was beheaded in Pozzuoli when he was a Bishop in Benevento. His relics were  taken to the Catacombs dedicated to his name only  in the V Century.

Restituta is  an african martyr women whose legend tells  her  body remains arrived at Ischia onboard of the same ship being her  martyr scaffold place.

Naples tried to even coempt  holy men not of its own, because in its two thousand years long christian tradition it has no martyrs.

The neapolitan Middle Age saw the foundation  of the first State  University in the XIII century history by Fredric II of Swabia.  A Universitry visitor was  Thomas  d’Aquino.

Thomas was born from the  Count d’Aquino and as a child he was taken for learning to the Benedictanian monks at the Montecassino Abbey, and after this Abbey was transformed into  a military fort, he   came to Naples.

In 1224  he entered the Dominican Order, in 1245 he  went to Paris and afterwards to Cologne. After his German experience he taught theology at the “neapolitan studium”. During this last period he wrote his memories kept in the Basilica St. Dominic Maggiore, in Naples,  where  the Crucifix  would have talked to him complimenting him for his work.

Thomas died in 1274  at  Fossanova while he was travelling to Lyon  for the Council called by Pope Gregor IX. 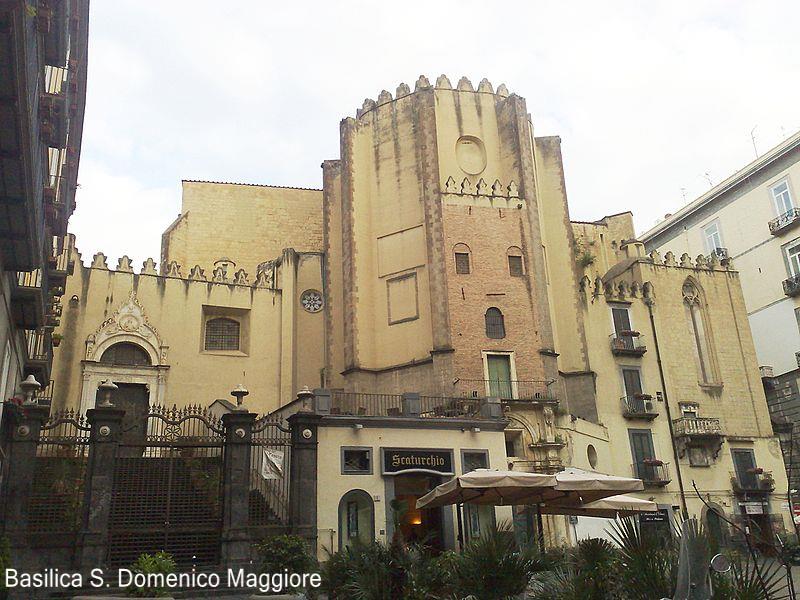